February 10, 2022
At some point in the last year Barnes and Noble got interested in selling Crime Fiction. The last four Barnes & Noble in four different cities and in two different states I browsed now have large displays that feature Crime Fiction. For years Crime Fiction was shoe horned between Sci-Fi and the General Fiction section. Usually buried in the back half of the store taking up only 2 or 3 shelves with only meager hardcover availability. Now in 3 of the 4 stores I visited there was a large U-Shaped section encompassing 16-20 shelves. In all cases there were dozens of hardcover offerings. It looked great to see that much variety and it certainly spurred the purchase of the three books below.

So after not buying from Barnes and Noble for the last handful of years...save for the most desperate circumstances...I think I might have to reconsider. Anyway these are my recent purchases. 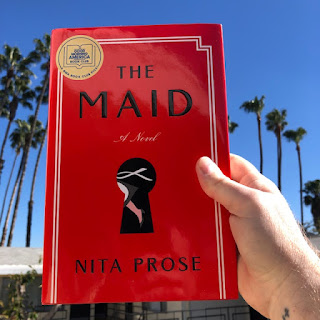 THE MAID - Nita Prose
I went from definitely getting this, to not getting this, to putting a hold at the Library for this, to buying this in about a 48 hour period. I am a Crime Fiction reader of simple pleasures. I need a dead body. And if that dead body is in an English manor with Upstairs/Downstairs shenanigans all the better. But I dislike the GMA sticker, hence the hesitation. It undoes a striking and simple cover. I understand the marketing need, I do. But I would rather have a banner text than this intrusive faux stamp. The branding here just clashes too much. 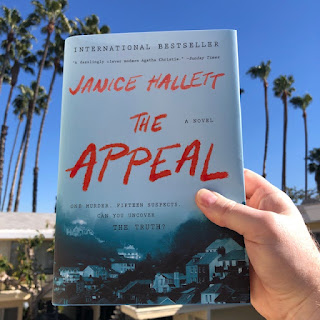 Author's first was released in the U.S. as her second, THE TWYFORD CODE, was arriving in the UK. Lots of praise for this tightly constructed whodunit with an inventive story structure. Not sure how this got on the radar other than UK set Crime Fiction always gets extra consideration. 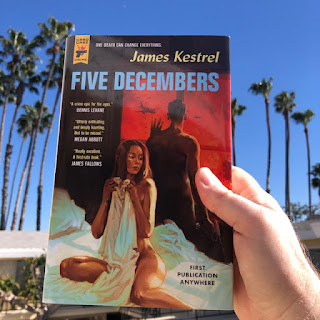 A 2022 Edgar nominee and blurbed by a number of authors I love to read. I finally caved to buying this book after picking it up and putting it down a handful of times. I followed the Hard Case Crime books pretty well in their early days. I actively bought the first 20-25 books. The plethora of people calling this an all-timer though won the day.

A quick [Editor's Note: No it is not] bit about Independent Booksellers: I buy independent, when I can. I live in Los Angeles but the closest dedicated Crime Fiction store is not close, as in not in Los Angles County the largest County by population in the United States. There is a wonderful independent store in my neighborhood, but their Crime Fiction is meager, snobbish, and with a healthy tilt to translated Euro titles. I started buying from Poisoned Pen because it supports an Independent and they get a wealth of signed books. But in a one year period more than half of my purchases either had the wrong book or a book not signed that should have been.  Of course I can order any book I want from any store I want...and if you want to wag your finger at me and tsk tsk here you go... because I have no interest in doing that as it relates to Crime Fiction. I have my reasons... condition reasons, timing reasons, social anxiety reasons and I feel like I do enough in other areas.

January 31, 2010
I thought this post would appear in October. Ya, know when SHUTTER ISLAND: THE MOVIE was supposed to be released. And then it wasn't. Something about Leo not being able to do 'press' for the movie. Doesn't really matter the reason, a February release date has one of those fancy Hollywood meanings: Not Good. Look I'll be honest, I didn't connect with SHUTTER ISLAND. I loved the fifties setting, the haunted house atmosphere, and impending doom of the Hurricane. Even the set-up of the story was intriguing but how it played out just didn't work for me. Some interesting characters, a bunch of great set pieces, but the ending announces itself with an expected, thud that went nowhere. Am I still going to the movie? Its Lehane, Scorsese, Leo, and Ruffalo of course I am. Anyway the list. 8. Prayers for Rain - 1999 The last Kenzie-Gennaro book follows our heroes as they investigate a guy who is terrorizing women into committing suicide. The book played like an e
7 comments
Read more

September 10, 2021
[Editor's Note: Started this missive, never came back to it. Still relevant, I suppose.] I am reading MURDER IN OLD BOMBAY by Nev Marsh. This was... technically still is... on my to buy pile. In the before time... the overwhelming to be read pile time... I would have bought this and thrown it on the shelf to read in the near or more likely distant future. I hope I like it enough to buy the second in the series. Buying a book is fun, buying a book that is good is better. [Editor's Note: Abandoned this book, unfinished.] BLACKTOP WASTELAND - S.A. COSBY So glad I didn't buy this last summer. Good decision to put off buying and reading what would have certainly been one of the best books of the year. New goal for the remaining 2021 calendar. Don't be dumb. Buy Mr. Cosby's follow up and read day one! [Editor's Note: I did buy a signed copy of RAZORBLADE  TEARS, meanwhile B.W. won every award, except the Edgar where it wasn't even nominated!? Also Signed firsts of
Post a Comment
Read more

April 07, 2022
The ever reliable Michael Connelly is back with his latest entry to the Bosch & Ballard saga, DESERT STAR. Releases November 8, 2022. The title of Michael's 2022 novel is… DESERT STAR, coming out on November 8. ⁰⁰Detective Renée Ballard and Harry Bosch work together to hunt the killer who is Bosch’s “white whale”—a man responsible for the murder of an entire family. Read more here: https://t.co/k4bsHa1OLd pic.twitter.com/WabzJjR6fk — Michael Connelly (@Connellybooks) April 6, 2022
Post a Comment
Read more