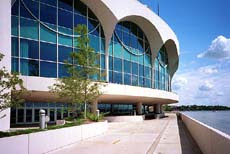 KM and I were in Madison Wisconsin, yesterday. We saw Michael Feldman's Whad'Ya Know. Mazel Tov! Lots of fun. The program was broadcast from the Lecture Hall at the Monona Terrace. The building was designed by Frank Lloyd Wright way, way, way back in the 40's or 50's. It was not built until the 90's. There is a pretty big debate in how close... or far... it is from FLW intentions. The Lecture Hall is small theater of 350 seats. Only about 125 or 150 seats were filled. The lack of a full house can make for uncomfortable surroundings, but that was not the case at all. It was cozy and inviting. KM and I will make a point of returning the next time we are in town. I took a photo with Michael. I'll load the picture when we are back in Rochester.

We ate at Gino's for lunch. Delicious lasagna.

KM talked me into going over to Booked for Murder. I didn't have directions and it was only by chance that we crossed University on our way out of Madison. So we took a right

instead of a left. It was just a short trip.

KM stayed in the car while I went browsing. I was greeted by a big friendly black dog. I'm desperately trying to save money for Milwaukee, so I was only looking to buy one book.

In my previous post I think my comments came off as overly negative about this store. It is a very good one. Lots of new and old books. In the future I will use the store to back build early books in an author's career. I almost bought Little Saigon by T. Jefferson Parker. They wanted $25.00 for it and I probably just should have pulled the trigger on that.

Instead I walked out of the store w/o buying a thing. Until the craziest thing happened.

KM told me to go back in and....... buy something! I nearly teared up. I didn't buy Little Saigon. I got Marcus Sakey's The Blade Itself. This book is on my 2007 list of upcoming books. Of course nobody knows that cause I have yet to publish the post. Anyway I paid an undetermined about as I can not find the receipt.