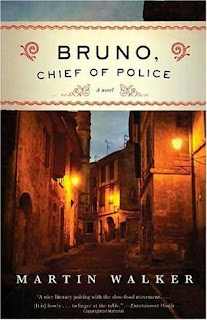 Just a quick review of BRUNO, CHIEF OF POLICE that has been hanging around for a bit. I enjoyed the book in spite of myself its seems.

So there is a photo stolen from the scene of a brutal murder, and there is also a portentous meeting between bitter rivals. That pretty much signals all that you need to know to figure out the who and why behind the mystery of BRUNO, CHIEF OF POLICE. After this Bruno spends his time explaining why he is powerless to investigate the murder, he plays a couple tennis matches and attends three dinner party's, as well as a picnic. Plus he picks up an attractive lady friend in that way that unattractive French men tend to do. Eventually with 50 pages to go, Bruno finds a reason to sort out the murder in almost the exact way you have been waiting for him to do since chapter three.

You would think that this aimless wandering around, and paint by numbers mystery plotting would signal doom for BRUNO, CHIEF OF POLICE. It doesn't though and maybe that is the best mystery of this book. If ever there was one BRUNO, CHIEF OF POLICE is more about the journey than the destination. A short book at just over 260 pages, the author Martin Walker seems to know just when to pull the trigger on his narrative. I may have left wanting, but I still somehow enjoyed all that was laid out before me.